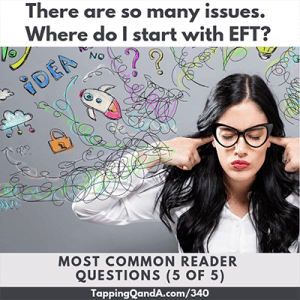 Tapping is great because it can be used on so many different issues, both physical and emotional. It works for issue from the past and worries about the future.

Because the tool is so flexible, sometimes it is hard to know just where to start. You want to get the most out of your tapping and you don’t want to waste your effort. When we are worried that we are going to do something wrong, such as picking the issue to tap on, it’s easy for us not to take action at all.

This week’s podcast will teach you three ways to tap when you don’t know where to start.

In addition to the instructions in the podcast, I have included a written transcript of the audio below the player.

Three ways to start tapping when you don’t know where to start.

It’s natural to want to get the most out of anything that we’re doing, so we don’t want to waste time and energy by pursuing something that isn’t going to be useful. So in our tapping practice, we want to go after the biggest, the most powerful, or the deepest issue. The problem is that in the beginning, sometimes we cannot see what the deepest, biggest, most powerful, most-useful-to-go-after issue is.

I have two analogies to help you to understand this.

The first analogy is to imagine the Everlasting Gobstopper that you might have seen in the Willy Wonka movies. The way that they’re sold in America is a piece of confectionary that has a sweet tart in the middle, with multiple layers of differently colored hard candy on the outside. As you suck on it, like a jawbreaker, the colors change, but eventually you get to the sweet tart that’s on the inside.

Sometimes our tapping is just like that! Even though there is an issue we want to reach, we can’t seem to get to it because it’s coated with so many other issues.

Much like the candy where we can’t get to the sweettart center until we have worked our way through the hard shell, by starting with whatever is available, what we do is we get the red layer right away. Then, there’s the blue layer and once that’s dealt with, there’s the green layer. By working on the layers a little bit at a time, we eventually find ourselves in the center.

So, by just starting, we’re actually working on the core issue, even though we don’t realize it, because we’re starting with whatever we have access to.

The other way I like to think of tapping is like something that is in my backyard. I can step out my back door first thing in the morning, but because it’s so early, there is mist everywhere and I can’t actually see what is in the backyard. But as the sun rises and it warms up, that mist slowly melts away and I’m able to see more and more of my backyard, until all of a sudden, I can see everything clearly.

When we’re tapping, not only do we get relief, but we also get clarity. When the issue we are seeking relief from is out of the way, it allows us to see the real issue.

As an example, I’ve been injured on and off over the course of the fall. This got in my way of being able to work out in the way I wanted. There was even a two and a half week period where I wasn’t allowed to work out at all. I wanted to tap on my lower back and the pain that was in my lower back. But, because I felt so much frustration that my body was letting me down, I couldn’t actually access the pain in my body very effectively because all of the emotion that was in the way.

So, I started with the emotion that I was feeling first. By tapping on the emotion, it created space for me to be able to see the core issue.

When we don’t know where to start, just starting is super valuable because as you do it, you will be able to take away the emotional edge that you feel right now and it will start to give you clarity about where to go next.

When it doubt, ask the question, “How do I feel right now?” Even if that feeling is, “I don’t know where to start with my tapping.” Start right there.

Even though I don’t know where to start with my tapping…I give myself permission to be easy with myself…Knowing that tapping on these points will create space…Which will make it possible to see the real problem.

By working in that way, you will clear away the mist and you’ll see the full backyard. AND you will be able to see the problem you actually want to go after.

Number two if you don’t know where to start, imagine the action that you want to take next and find the emotion associated with taking that next action.

I look at my to-do list and I say, “What’s the most valuable thing on my to-do list?” I tune in and I imagine myself doing that right away. I then tap on the emotion that comes up for that image.

By using that as an entry point, even if I’m not getting rid of the biggest issue, I’m getting rid of something that will allow me to take action and move forward in a thoughtful and deliberate way. By going through a process like that, it makes it a lot easier for you to move forward. So, number two…think about the action you want to take next and tap on any emotion that comes up around it.

In basket tapping you imagine a basket in front of you. It really can be any type of container, a box, a jar, or whatever works for you.

When start tapping for the entire basket. I visualize the basket and then I move from tapping point to tapping point. As I do this, I might imagine the papers blowing away, the marbles evaporating, or the basket getting smaller and smaller. Go with whatever your subconscious mind does as you place your intention on the container. You will find that you’re able to clear a huge number of things all at once.

When I do a few rounds of basket tapping, what often happens is one issue will become really sharp into my mind and, because it’s sharp in my mind, it makes it easy for me to move forward and know that’s the place I want to start with some more focused tapping.