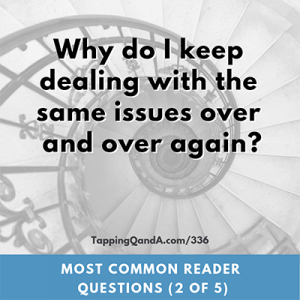 Note: This is Part 2 of 5 in the Most Commonly Asked Questions series. Make sure you check out all 5 parts.

It can often feel like we are dealing with the same issues over and over again and when that happens, it can feel like tapping is just a giant waste of time. Our reasoning tells us that if tapping was working, the issue would be taken care of.

There are three main reasons behind why it can feel like we aren't making any progress with our tapping. This week I explore these reasons and what we can do to recognize the true progress we are making.

(Full transcript of the audio can be found below the player.)

This week we're dealing with: Why is it that I keep dealing with the same issue over and over again? I spend time tapping on it, I'm thoughtful about it, I watch videos. I use scripts. I might even work with a practitioner, and I'm just not making the progress I want.

I even regularly have this conversation with my clients that will be five or six sessions into multiple months of work. My clients will say something like, "You know, Gene? I really enjoy our time. You are charming. This is lots of fun. But I don't feel like we're actually making any progress." In those moments my response is, "Great. I appreciate the feedback. Let's pull out your intake form and let's take a look and see what has actually happened."

Then what we're able to do is we're able to compare the current moment to where they started, and then there's this recognition that transformation actually has happened.

Reason number one why we feel like we keep dealing with the same issue over and over again is the phenomenon of the new normal. What this is about is when things change we adapt to the change very, very quickly, and we forget what the old way is like.

As a practical example, last year about this time I got the new iPhone X. And the new iPhone X doesn't have the home button on it like the other ones. There's not button that you push. It's all just screen. It's a new form factor and you use it in a new way. I got the new phone and it took me a couple of days to get used to the new way of interacting with the phone because the button wasn't there and I had to interact with it differently.

A week after I got used to the new phone, I was at a conference where a friend of mine wanted me to videotape some of the stuff that he was doing onstage. He handed me his older iPhone. It took me about a minute to figure out how to actually video him. Now keep in mind, this is a phone, ten days earlier, I owned. But because I had moved to the new operating system, my brain just let go of the old operating system because it was no longer useful.

Four has become the new normal and you have forgotten what it was like to be at a seven. Because the further distance you get from the old discomfort, the more likely you are to forget it. It feels like you're dealing with the same issue, which is the pain in your knee, but it's not the same issue. Because the issue before was a seven and now the issue is a four.

You might be saying, "Well that's just semantics. It's a lower level." For me it's a different issue because when it's a four it could actually be a different problem. That we've solved problem number one which has reduced some of the pain, and now there's problem number two that is there.

The same thing can happen with a fear. I might be afraid of speaking in public and that fear is at a seven. We tap on the fact that you're afraid that you're going to lose your place. We get that all taken care of and now the fear of speaking in public in only a four because you're comfortable with that. But in that four what is left is you're afraid you're going to be judged. Even though we only had one number of discomfort, it was a couple of issues that were joined together. If you're still afraid at a four, then it doesn't feel like you're making any progress and you're still dealing with the same issue.

The phenomenon of the new normal makes it really easy for us to miss the progress that we are making, and it feels like we're dealing with the same issue.

The second reason why it can feel like we're dealing with the same issue, and it's very related to the first, is how we understand the transformation in relation to the action that we are taking.

This is an analogy that I have actually been using quite a bit over the course of the last two months with my clients. What I want you to imagine that you are standing next to a lake on a beach. The reason why it's a lake is because I don't want you to imagine waves coming in and out. You're standing at the edge of the water and the water is three inches from your toes. As you look down you can only move forward three inches before you get wet It's kind of like imagine the water being a fear or an issue or something that is holding you back.

We do a bunch of tapping and you feel better and you have more confidence. As that happens, imagine that the water is receding away because that fear is getting smaller. But because the fear is getting smaller, you take advantage of all of this new land that you get to walk on. What you do is you walk up to the edge of the water again, because you're moving forward, because you now have the opportunity to do that.

From this new position, if you look down at your feet the water is still only three inches away from your feet. The distance from where you are to where the edge of what is comfortable is still exactly the same, and what you've done is you have forgotten that you have walked forward. There's now all of this new land that you can walk on. But because you're trying to move forward, you've pushed yourself to the edge.

Again, the fear is still there and it's the same distance from us. It feels as if we're dealing with the exact same issue, because we have lost track of the context of how far we've moved . We're only looking in relation between where we are and we're our struggle is. When we do this, we mistake the fact that we haven't made progress with the relationship between us and the fear. Hopefully, you are in a circumstance that as you are clearing fears, you're giving yourself the opportunity to move forward and try new things.

A perfect way of thinking about this is thinking about speaking in public. At the beginning you might be in a situation where speaking in public is not something you are comfortable at all with. We do some work and all of a sudden you feel good enough that when you are at a meeting at work and there's ten of you sitting around the circle, you now feel comfortable enough to speak in public and you can share your idea.

But because your idea is so good, your boss wants you to share it with the whole team. Now you're in a situation where you have to stand in front of 25 people. It's not a circle, everybody around the same level, but you're now standing in front of the group and you're having to share from that position. All of a sudden you're nervous again.

Because those are different, they're actually different issues but they feel the same. The analogy with the water at our feet. The water is at my feet; sitting around a table with ten people. We tap, the water recedes, but you walk to the edge of the water because now you're speaking in front of 25 people, and so on. It's important for us to recognize that even though we name the problem the same – speaking in public – it's really a different problem each time.

What happens when we're doing that, because we're passing through the same issue over and over again, it's like going up a spiral staircase. If you look at someone from above, who's walking up a spiral staircase and you're straight above them, it literally looks like they're walking in a circle. They're just going round and round and round. But if you're looking at them from the side what you do is you see them going up, and what's happening is they're passing through the same spot.

The big take-away from all of this is as we do the transformation process, it's really easy for us to miss the progress we're making either because of: 1) the new normal; 2) we keep pushing to the edge and only notice the edge; or 3) as we pass through an issue again and again, we're not recognizing that we're moving up.

Sometimes the progress is self-evident. Sometimes it's like, "I couldn't do this thing and now I can do it, and we don't need to be doing this." But lots of times, particularly with these issues that we're creeping through, it's really easy to miss the change that is happening.