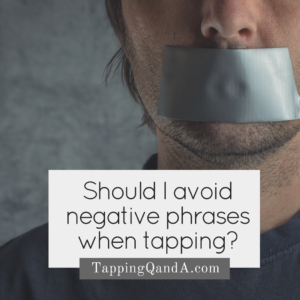 I have received this question a lot and there are few reasons why it’s such a common question.

First, some people don’t want to focus on the negative because they are worried that they will tap something negative into their system. When we are tapping we are not tapping anything in or anything out of our system. Instead we releasing the thoughts and beliefs that are not useful. It is a process of returning to our natural emotional balance.

There is no proof that this is the case (as in this has never been proven in the context of scientific experimentation). AND I could not find an explanation why it would be useful for our subconscious mind to screen out the negative.

I believe it works in exactly the opposite way. Instead of not hearing the negative, I believe that if there is any belief in our subconscious mind about a negative outcome, it will present itself no matter what we say.

Let’s take a look at what happens when we are tapping using both negative and positive tapping phrases. For this example we are going to use the issue of wanting to lose weight.

I have failed before at losing weight…and I’m worried that I will fail again…every time I lose the weight it creeps back…but this time will be different…not only do I have a plan to lose the weight…but I have a support system in place…to help me keep it off.

If instead we decided tap with positive phrases, it would go like this:

On the surface it looks as if we are only focusing on the positive, but our internal monologue is very different. Every time one of those phrases is said out loud if there is any part of the system that doesn’t believe the phrase to be true, the critical voice will speak up to voice its objections. It might go something like this:

You can see that when we only focus only on the positive and there is a part of us that doesn’t believe the positive statement, the negative will show up.

The good news about this that it doesn’t matter if we use positive or negative phrases because either way we will find our way to tapping on the issues needing attention.

Which Should I Tap On?

The question becomes “Should I use positive or negative phrases while tapping?” For me, the answer is both.

If I recognize a specific limiting belief or block, like the fear of gaining the weight back, my tapping will be most effective if I go right at that issue.

At the same time, when I state the goal I want to achieve in the positive I will find my way to negative self-talk and limiting beliefs that I didn’t know existed.

When tapping I recommend that you alternate between positive and negative phrases so that you get both of these benefits.