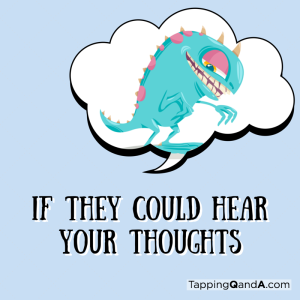 A number of years ago Andy Hunt wrote an interesting article on his site Practical Wellbeing that has stuck with me.

In Self-Hate Speech he looks at the hate speech laws of the UK and asked the question of how would law enforment respond to you if they heard the words you thought about yourself.

I don’t know about you, but I am certainly capable of thinking some nasty things about myself.

In addition to thinking nasty, hateful things about ourselves, for some reason we also give those thoughts much more weight than the positive thoughts..

“Why is it that if some dude walked up to me on the subway platform
and said these things, I’d think he was a mentally ill asshole,
but if the vampire inside my head says it,
It’s the voice of reason.”

The Voices In Our Head

It is so easy to take the voices in our head to be the truth. To believe they are the way the really world is.

But it is not true.

There is a very simple way to tap for the nagging, self-critical voice in your head.

As you keep tapping the negative voice will get smaller and smaller.

It might not go away, but it will lose power so that when it speaks up in the middle of the night it won’t have the same power over you.