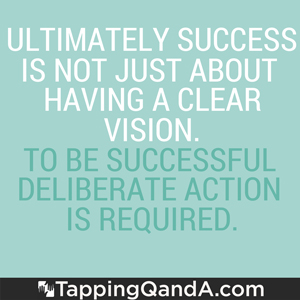 The other night I had a vivid dream.

It was about a group of five friends in their early 20s who moved to New York City to pursue careers in entertainment. In the dream I didn’t know the five of them well but I think they were friends of a friend.

I was helping them to find their way in the city, like so many did for me when I moved here.

In the dream they had been in the city for a few months, they had established themselves and we were meeting for drinks.

As we were chatting I kept asking them, “Are you here for the adventure and story of pursuing something in NYC or are you here to be successful?”

They just looked at me and shrugged. They didn’t understand my question.

The Story Of Success Vs. Success

For a year and a half I pretended that I was moving to New York City.

I would catch up with friends and they would ask what is going on in my life. I would excitedly tell them, “I’m moving to New York!”

In most cases they would be excited for me. “That sounds like such a great adventure.”

Looking forward to something fun felt great. My friends shared the thrill vicariously by daydreaming a little about adventure and what it might be like for them to make a big change.

But I was no closer to taking action.

Having a fun daydream about moving to New York wasn’t a bad thing. It was a fun story to tell. It showed that I was a dreamer and that I had some boldness. It demonstrated that I was willing to try something new. It meant there was the possibility of something better in my life.

Except for the fact that nothing was really changing.

Day dreams are comforting. Distant adventure is exciting. It helps this moment pass.

And if that is all you are looking for, great. BUT if you want to take action there needs to be more to this equation.

The Dirty Secret About Success (And It Is Not “The Secret”)

Ultimately success is not just about having a clear vision. It is not about being able to tune into your deepest desires and “feel” what you want. Those are good and often necessary ingredients of success.

But for you to be successful deliberate action is required. It will involve discipline and sacrifice.

This doesn’t mean that you have to give up fun!

This doesn’t mean that you have to work 24/7 on your goal.

It does mean that you have to take action and the more action you take the closer your goal will be.

I Am Not Seeking To Rain On Your Parade

Just like the people I was talking to in my dream, I am simply asking if you want to enjoy the story of saying you are making the change, or if you really want that change.

Both options are perfectly fine but it’s important that you know which of those paths you are treading.

If you are ready to stop daydreaming and want to take action towards your goal but you aren’t sure where to start, I would encourage you to check out the RuachCenter. It is a website designed to help you to take action, especially on those days you are having a hard time moving forward.

Gene Monterastelli is a Brooklyn based EFT practitioner who in addition to work with clients and groups regularly writes and records about how to use the tapping to move from self-sabotage to productive action.
Gene’s Full Bio & Services

This not just an EFT for Anger book. The contains some of the most comprehensive set-by-step tapping tools that can be used for all emotions and can be added to your tapping tool set right away.