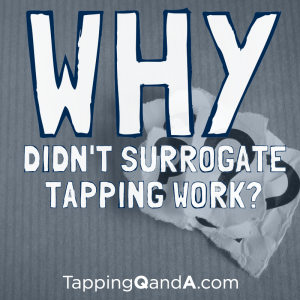 Surrogate tapping is a tricky topic. Tapping itself is difficult enough to explain, but trying to explain how I can tap on my body to promote change in someone else is a whole other level.

At that point it sounds like we are talking about woo-woo crap that just can’t be true.

First, my sister regularly takes her dog Addison to the vet. Like many animals, Addison gets really nervous when she visits the vet and she especially hates having her nails clipped. When a trip to the vet is scheduled my sister will send me a text so that I can tap for Addison (from the other side of the United States). And next I receive a picture from my sister of Addison lying calmly on the ground completely relaxed and serene. It has happened too many times for me to dismiss this as some kind of coincidence.

Second, I have been working with a family with a child who has been diagnosed on the autism spectrum. Over the last six months the family has seen some amazing results with surrogate tapping. A few weeks ago their son started to backslide and lost almost all the progress he had made to date. I put together a short tapping sequence and within a day he not only regained everything the family had achieved from the tapping, but it also triggered a significant clearing and release on a physical level from his system (I won’t go into detail here but am sure you get the picture!).

Sometimes people ask me how all this works and all I can think to say is, “I have no idea!”

With that being said, it doesn’t always work. Just because we are surrogate tapping it doesn’t mean that progress happens. There are times when we tap and yet we cannot perceive any progress.

Two years ago, a very dear friend of mine’s 33-year-old body succumbed to cancer. As I wrote about what it was like to tap for her I asked, “Why didn’t the surrogate tapping work?”

Because of the number of people who have been asking me about surrogate tapping (and specifically about my experience tapping for a friend with cancer) I thought this would be the perfect time to revisit the idea of surrogate tapping.

In this audio I talk about surrogate tapping, when I do it, and why I think it didn’t work on my friend’s cancer.