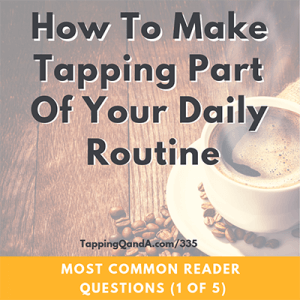 Note: This is part 1 of 5 in the Most commonly asked questions series. Make sure you check out all 5 parts.

When someone joins my mailing list, one of the two questions I ask them is, “What is the biggest issue you have when it comes to tapping?”

When I started asking this question I expected to receive lots of answers about specific topics or issues that are particularly hard to deal with. I do get a lot of these types of responses, but a good 25% of the responses say something along the lines of, “I know tapping works, but I just don’t do it.”

This week I have for you three simple steps you can take that will transform tapping from this thing you beat yourself up for not doing, into something you reach for every day. (Full transcript of the audio can be found below the player.)

I would be willing to bet that when people tell me the most common struggle that they have with tapping 25% of the time the response is, I just don’t reach for tapping. I know it’s a useful tool, but I never seem to be able to do it.

Today, what I’m going do is I’m going to share with you three things that will make it much easier for you to make tapping something that you regularly reach for, and reach for in the moment when you are struggling, and turning it into a routine so it happens more and more often. We know it’s so useful, and if you know it’s useful, and you don’t do it, then it becomes really easy to start beating yourself up, because you are missing opportunity, and you are wasting time.

Here are some things to keep in mind that will make it much easier for you.

Number one, create a new habit. It takes time for us to get into a space where something becomes habitual, and the reason that is, is that when we do something over and over again, we are creating neural paths for doing that activity, but it takes us doing it a certain number of time before it becomes something that is habitual.

You’ll hear people often quote that it takes between 14 and 21 days to create a new habit, and there’s a really amazing study that leads us to that. The details of that study aren’t super important at this point, but just know that it takes time to do it.

As an analogy, think of it kind of like a path. If you were walking through a field in which you’ve never walked through before, after you walk through the field, we might be able to see your footsteps, we might see the grass that’s matted down, but a few hours later there might be no recollection of that as all, as the leaves of the plants have regained their strength, and stood back up again.

But, if you walk that path over and over again, slowly that path becomes more trodden. It’s easier to see because there are remnants of the path, and it actually creates space for you to move through. That’s basically what happens inside of our brain. The more we do something, the deeper the path becomes, the easier it is for us to fall into that. Think about putting on a pair of pants, you always put on a pair of pants one leg first, and the other leg second, just because of that habit, and you don’t think about it. It’s just the steps that happen.

Here are some easy ways to make something a habit.

The third thing to do, and I’ve already mentioned it, is to attach it to a habit that you already have.
Starting a new habit from scratch is difficult, because you’re having to think about it, and do it from willpower until it becomes that habitual thing. If we’re attaching it to something that you already do, then it becomes easy to do.

One of the ones I use the most often is the example I already gave, which is brushing your teeth, because almost all of us do that every single day. Most of us do it at least twice a day in the morning, and in the evening. It’s something that we’re already connected to. For me, I spend some time stretching every single morning, and I spend some time on my foam roller just because I have a better day when I do that, and so, tapping is a really natural thing to attach to that thing. If there’s something that you are doing every day already, tap after it, or before it, because that habit is already installed.

Number two is to do it earlier in the day. When we’re creating a new habit, it is requiring us to use willpower to do that. It’s a conscious act of our will to do this thing that is not regular. Willpower is a limited resource. As the day goes on, you’re using that willpower to make all of the choices throughout your day. What you’re going to have to lunch? What you’re going to wear? What order you’re going to do tasks at work? And, because that is the case, you’re putting yourself in a position where it becomes more difficult to navigate all of these things later in the day, because you have spent that willpower.

That’s the reason why when you create a new eating plan, breakfast is really, really easy, and dinner, and after dinner is really hard. It is because you have expelled all of that willpower throughout the day, and it becomes harder, so if you’re creating a new habit. The earlier in the day you do it, the more likely you are to be able to make that conscious choice. By doing it over and over again, we start deepening that path which makes it a habit.

Number three is to initially to only do it for a small amount of time. I think of my clients who decide that at new years they’re going to get themselves in shape, and to get themselves in shape. They’re going to work out three times a week for 90 minutes. That is a huge ask, because what you are doing. You are asking yourself to find four and a half hours to do something that you weren’t doing before. I don’t know about you, but I don’t have four and a half hours just lying around in my schedule where I can throw in something new.

When we choose a large chunk of time that we’re going to try, and do, it becomes really difficult, because of the amount of changing we have to do the rest of our lives to accomplish it. It would be great if you were in a circumstance where every single morning you were going to spend 30 minutes tapping, and that’s what was going to happen. Because finding 30 minutes every single day becomes a difficult thing for something that is not habitual, it makes it hard to do.

The second thing you can do is to set the goal of tapping every single day around the amount of time you are tapping, not the amount of progress you are making.

Sometimes when we tap it can go really super fast, and we can go really super deep. I was working with a client on Friday, and we were supposed to tap for a half an hour, and after about 11 minutes we had done really profound work around money, and family, and a bunch of stuff, and she was done. We had just completely wrung her out, and doing more work wouldn’t have been useful.

There are other times where I can spend 45 minutes on an issue, and I don’t see this real tangible progress. I know I am doing work, and I’m undermining the belief system, and I’m making it easier for me to see the world in a new way, but there’s not this immediate tangible results inside of that session.

Even though both of those sessions happened, and they’re both valuable, our emotional response to them is different. 11 minutes profound work, 45 minutes, boy it just feels like I’m scratching the surface. If your definition of success is based specifically on the outcome, then it becomes really easy to become frustrated.

Some days those seven minutes might be absolutely amazing, and absolutely transforming, and other days not so much. But because you are doing it every single day, you are making a habit out of it, so the goal being the amount of time not the amount of outcome makes it easier for you to persist, because you have been successful even if there hasn’t been world transforming changes.

Three, make tapping every single day a non-negotiable. That no matter what happens today, this particular thing is going to happen, and what I have found in my life is, typically, I can only have two, maybe three non-negotiables.

If you do those three things, 1) go through the steps that I laid out on how you can create a habit, 2) as you’re making that plan, choose the amount of time that you’re going to tap, not the amount of progress you’re going to make, and 3) make it non-negotiable. This is something I am going to do every single day.

If you do these three things over the course of the next couple of weeks, you are going to be in a circumstance where tapping every single day is something that happens, that becomes easier, and easier for you to use.