In Podcast #236 I answered four listener questions. Below you will find the audio of all four questions and the transcript for question #2. Please bear in mind that I speak in a slightly more informal fashion than I write, which you will notice in the transcript below. The transcript has been edited slightly for clarity. If you have a question you would like answered in a future podcast please let me know. 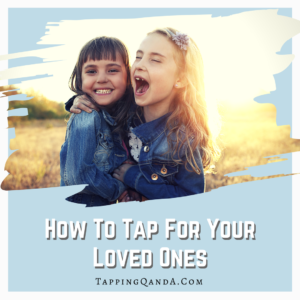 Question: How can we use tapping as a remedy for others who lack confidence and suffer from various unwanted habits and physical problems?
Kesavannamboothiri, India

This question sounds like it’s about how to tap surrogately for someone else.

If you’re not familiar with the term surrogate tap, that’s basically when I am tapping on myself as a surrogate in place of you. Often people will teach that we are all connected and we can heal each other. If I just tap on myself, it will have a healing effect on you. I don’t know if that’s necessarily the case. There isn’t any specific scientific evidence that says that is possible. The study of quantum physics and the quantum mechanical principle of entrainment lead us to believe that this is something that is possible and as time passes we’re discovering more and more about this. There are some interesting studies that see this as a possibility, but they’re anything but conclusive.

With that being said, this is the way that I approach it.

The only thing that I truly have control over are the choices I make and my emotional responses. Sometimes I don’t even have control over those. But in the best of all possible worlds, when I am in a resource-rich state and I’m doing the best that I can, that is what I can control.

Here is an example to illustrate the way we show up differently and how it impacts the people around us. I travel a lot. Travel problems are inevitable. When that happens there’s this long line of people who are standing up to talk to the gate agent to make changes to their ticket because things have gone wrong.

It makes perfect sense that people will be disoriented and emotional in those moments. I observe people going up to talk to the gate agent after I’ve been helped. As each person approaches the counter you can see the gate agent immediately respond to the person who is in front of them based on how they emotionally show up.

If the person steps up to the counter really, really frustrated, immediately they go into defensive mode. And if the person shows up with the attitude of “This really sucks. I know this isn’t your fault. Can you please help me?” even before they say those words, you can see the gate agent actually relax a little bit because they know they’re not fighting with the person in front of them because the person they’re talking to understands what’s going on.

The way the person approaches the counter and the emotion that they are carrying gives the gate agent permission to act in a different way. The kinder they are, the more space there will be for them.

That is the way I approach tapping for others. First is how I show up emotionally. If I show up calmly and I’m not angry, or I’m not anxious, or I’m not worried, it immediately creates space for you to make better choices. The second thing is if I show up in a way in which I’m not overreacting to the way you are acting, then we’re never going to be in the circumstance where anything gets escalated, and my presence and my response makes what you’re doing worse.

Not that I’m taking responsibility for your choices but it’s possible for me to show up in ways where it makes it easier for you to be agitated because of the way I respond to what you do. My goal whenever I want to ‘tap for someone else’ is just to get myself as emotionally clear as I possibly can when I come to the situation.

The way that I do this is through a technique that I call Talk About, Talk To, and Talk As If. There’s a comprehensive explanation of this in Bonus Podcast #22. In that podcast I have a much longer explanation of this process, but I’ll give you a short explanation now so you can use it right away.

It happens in three steps:

I use this protocol when I’m trying to get myself clear and I use it for an individual. I’m not doing it for people in general but for one person.

Part two is talk to. In the talk to phase I’m going to be pretending. I don’t have the person around me, they’re not sitting across from me, but I’m going to imagine that I’m going to talk to this person whose I want life to be better. As I do this I share with them everything I want them to hear. And some of those things will be super-positive, “I love you…I want what’s best for you…I want you to heal”. Some of those things might be super-negative, “I hate the fact that you do this and it hurts my life…I hate the fact that you’re acting so selfishly that we have to pick up the pieces for you”. It can be instructive, “I really wish you would pick this up…I really wish you would try this…I really wish you would listen to your mother”. Whatever that is.

The third part is talk as if, and in this phase we’re going to guess. We’re not going to know for certain but we’re going to guess we know why the person subconsciously is making the choices that are making. Not consciously but subconsciously. Let’s pretend that we’re really concerned about a drinking problem that a loved one has. Talking as if would be, “I have a feeling that you are drinking every single day after work because you feel really desperate and you feel hopeless, and you don’t want to stay in your apartment alone and drinking a lot numbs the pain”.

Or it could be, I have a feeling that the reason you overreact at work all the time is because in your last job you weren’t taken seriously, so every time you speak up you’re still fighting to be taken seriously. That’s the reason why you’re so combative. I don’t know if that’s the case but I’m guessing. What we do is we take this part and we tune into the person and we do all three steps.

We talk about, we talk to, we talk as if. I found when we do this we show up in a very different way, which makes the relationship better, and we create space, which allows them to make healthier choices. Doesn’t mean that they’re always going to, doesn’t mean they have to change, but we’re creating the space and the opportunity for that to happen.