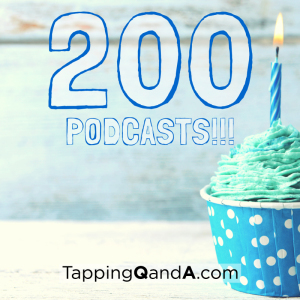 Between the bonus podcasts and the full show I have shared over 200 podcasts!

It has been an amazing journey. I would like to thank:

None of the guests was paid for their contribution. I feel so blessed that they were willing to share their time and their information and wisdom.

As the person who had a front row seat for the full catalog I know my life is richer because of it.

Recently, I was chatting with Gwyneth Moss and she asked if she could interview me about what I learned from doing 200 podcasts. That is the interview I am sharing this week.

Even though you receive the podcast free of charge does not mean that it is free to produce. Between the time it takes to record, edit, and publish each podcast as well as the bandwidth costs for you to download the shows, it costs between $300 and $500 per episode to produce and distribute.

I am firmly committed to keep providing this resource free of charge. AND I am committed to keeping the entire library all the way to the first one available. (Did you know on average every day every podcast in the archive is downloaded at least once? Even the ones from way back in March 2009!)

My Audio Reflections On 200 Podcasts

Here are my reflections on 200 shows. I would love to hear yours down in the comments.