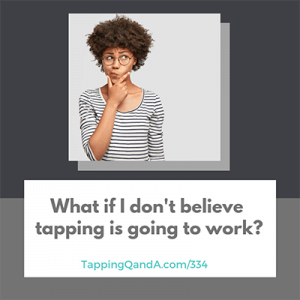 One of the main reasons that people say they don’t tap is because of their belief that tapping won’t work. This is a reasonable concern. Tapping is weird and it does seem unreasonable that tapping on the body can provide healing and relief.

When I have encountered this resistance in the past, I’ve asked the person who doesn’t believe in tapping if they would be willing to tap on the fact that they don’t believe it will work.

And a funny thing usually happens…they are willing to tap on their disbelief in tapping.

You will notice in the first paragraph above I wrote “one of the main reasons that people say”. I used the word say very deliberately. Sometimes people don’t tap because they don’t believe it will work and sometimes they say that to mask the real reason they don’t want to tap (such as fearing success, not wanting to get to the root cause, or because of the secondary gain of keeping the issue).

This week we explore why you don’t tap and how to tap for not tapping. (Trust me, it will make sense and it will work!)