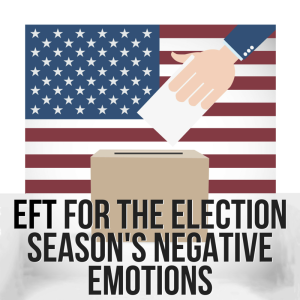 Here in the United States it already feels as if the Presidential election campaign has been going on for way too long. And we still have eight more months to go. The lead story (and often the first five stories) on the nightly news is invariably about the election.

One of the most difficult parts of the election season is hearing most of the candidates talking about how bad everything is. They focus on negativity so that they can talk about how great they are and how they are the key to a brighter future. This sustained daily dose of negativity can take an emotional toll.

This week I chat with Brad Yates about how we can participate in the process fully without being overwhelmed by the negativity.

I have a feeling this is an interview you will come back to a number of times throughout the election season.

About Brad: Brad has had the privilege and pleasure of working with a diverse group of clients, from CEOs to professional and NCAA athletes, from chiropractors and psychiatrists to corporate and federal attorneys, from award-winning actors to residents at a program for homeless men and women in Santa Monica. For several years he taught a weekly class using EFT and guided imagery at Sacramento Drug Court. He has also been a presenter at a number of events, including several International Energy Psychology Conferences and the Walk On Water (WOW) Fest in Los Angeles. He has presented at Jack Canfield’s Breakthrough to Success event, and has done teleseminars with “The Secret” stars Bob Doyle and Dr. Joe Vitale. He is also the co-author of the best-seller “Freedom at Your Fingertips,” a featured expert in the film “Try It On Everything” (along with Jack Canfield, Bob Proctor, Dr. Norman Shealy and Dr. Bruce Lipton), and has been heard internationally on a number of internet radio talk shows.