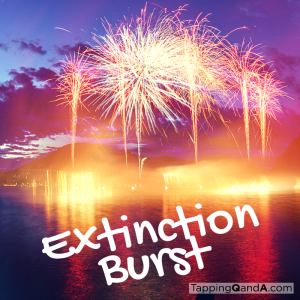 You have been there before. You are trying to make a change, like giving up sweets.

The first day is hard. The second is harder. The third day, for some unknown reason, is really easy. You feel awesome. You are making progress. Real change is happening.

Then along comes day four…

You come home from work and you find yourself eating one little piece of candy. You think, “This is no big deal. It is only one piece.”

Then it is two, then four, and then the bag is empty and you think, “Screw it! It’s too late!” and you devour every sweet in the house plus some potato chips for good measure.

Within moments you’re filled with shame and self-loathing. You wake up the next morning feeling defeated.

What you have just experienced is an “extinction burst”. I think David McRaney described extinction burst perfectly when he writes: “a predictable and common blast of defiance from the recesses of a brain denied familiar rewards.”

In more common terms you are in the process of making a change and some part of your system is not getting what it wants, it is royally pissed off, and so it does whatever it can to get what it wants.

In our example, the body was expecting a feel good sugar high from sweets. When it didn’t get what it wanted it it turned you into an emotional monster that was willing to eat everything in sight.

What You Can Do To Overcome The Extinction Burst

First, knowledge is power. When we know that something troubling is coming (aka an inflection point) we are much more likely to make a good choice if we have a plan to deal with it.

Imagine this is like the fire drill you practiced as a kid at school. If there ever was a fire you would know exactly what to do.

The way I deal with this is when I feel an extinction burst coming on I name it and tap for it. It looks something like this:

Right now my system is throwing a bit of a temper tantrum…It wants its needs met in a way that I know is unhealthy…I know I could easily give in to its needs…And I would feel better for about 7 seconds…But then I would feel really awful and disappointed in myself…I am making choices that are going to serve me in the long term…If I can last through this extinction burst then the habit of making better choices will be stronger…I am stronger than this…And I am worthy of making the better long-term choice.

Do you think saying this out loud and tapping is silly? You’re right. But since the first of the year I have effectively fought off donuts, chocolate, and white bread just like this.

Second, understand your system is seeking to have a need filled when you are having an extinction burst. As I was working my way off sweets my body was having a hard time because it needed them. In the first 3 days where I completely cut all carbohydrates out of my diet I was having headaches in exactly the say way I had caffeine withdrawal when I cut down on coffee a few months ago.

Even when I am tapping for fighting the extinction burst there is still an underlying need for pleasure or comfort or relaxation that requires satisfaction. It’s a good idea to plan how you you can meet that need in another way.

When my friend was quitting smoking she realized that part of the reason she was doing it was because she was looking for an excuse to go outside to get away from her crazy co-workers. So when she craved a cigarette she took a walk around the block instead to give her a break from the office.

When I was cutting out carbs it was permissible for me to have a teaspoon of all natural almond butter. When the extinction burst showed up and I wanted to eat everything I would allow myself the little treat and it got me through the afternoon.

Third, it is important to have clearly defined, measurable stepping stone goals so that you can reward yourself for reaching them as you work towards a bigger goal.

For me, I usually experienced an extinction burst when there was some unmet emotional need. I am much less likely to have emotional needs when I am feeling good about myself and my progress.

To boost my self-esteem I celebrate my successes along the way. For example, every time I lost another 3 lbs of body fat I would go to one of my favorite places in NYC and take photos.

Getting outside, with no work responsibilities, trying to find beauty, and give myself a chance to work on being a better photographer is a real treat for me.

By allowing myself a chance to celebrate my successes I was much more likely to have the will to make good choices as I kept working towards my goals.

Unfortunately (And Fortunately) It Is A Natural Thing

Unfortunately, extinction bursts are something that everyone experiences when they are trying to change a habit.

Fortunately, extinction bursts are something that everyone goes through. You are not crazy. You didn’t fail miserably. AND you are not alone. Because this is something we all go through. You will notice the use of the the word “predictable” in the definition above. It is not a matter of if this is going to happen, but when.

But with the right planning and preparation we can respond to it in a way that doesn’t derail our goals.