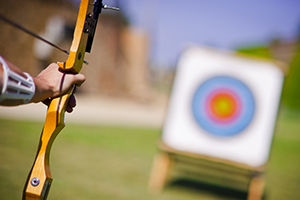 A few weeks ago I wrote about the main reasons we don’t take action is fear.

Of all the fears we experience the one my clients talk about most is the fear of failure and the consequences that come with failure, such as the waste of time, feeling embarrassed that others have seen us fail, and missing an opportunity, to name just a few.

The truth is that often failing is the best thing that can happen to us because of how much we learn about failure.

There is a common misconception about the skill of sharpshooters. Most people believe that they are so skilled and prepare so much for a shot that when they fire they are prefect.

In reality, particularly for long distance shots, they quickly line up the best shot they can and once they have fired, they follow the trajectory of the bullet. When they see where their first shot lands they have a better understanding of the conditions (like wind). They rapidly adjust and fire again.

The second bullet is fired so quickly that their target hasn’t had a chance to respond to the first shot.

You could see the first shot as a failure as it missed the target, but because a lot was learned from the first shot, the second is much more precise.

When successful business men and women are asked what they would do differently in growing their businesses a common response is, “I would have made my mistakes much quicker. I didn’t know what I didn’t know and my assumptions were flawed. Only through trial and error did I find my way to the right path.”

In the first press conference after Cam Cameron was hired as head coach of the Miami Dolphins he declared that the team was going to “fail forward fast”. He was setting the tone for his players and coaches that mistakes were OK as long as they were made in the right direction and lessons were learned from them.

Not Failing For Failure’s Sake

It’s important to note in the sharpshooter example that the first shot is fired with thought, training, and experience. Once a reasonable shot is lined up feedback is gathered from the results.

When we take action we are not doing it mindlessly or carelessly. We are not seeking failure just so we can claim progress from it.

Instead we are doing enough planning to take a reasonable action that will move us forward and if we do fail we will also have the opportunity to learn from it.

Here is a simple way to tap to help you to take action when the fear of failure is holding you back:

There is a part of me that is afraid that I will fail…Failure is no fun..Failure hurts…Failure shows others I can’t do this…Failure is a waste of time…Failure is a waste of an opportunity…Because I am worried about failure I am not taking action…I recognize the fact that everything I can do today…At some point I couldn’t do it…And I failed many times while learning how to do it…When I fail I am gaining real world experience…And that will help me to make better choices next time…I will never get it perfect by planning and planning and planning…At some point I need to take action…I am not going to be careless…And I am not going to be thoughtless…I give myself permission to take action knowing I won’t be perfect…Because I can make progress and be successful without having to be perfect…I have survived failure before and I will survive it again…I am not failing just to fail…I am not seeking failure…But when it happens I will make the most of it.

If you are looking for help clearing the fears (named and unnamed) you have before taking action I would encourage you to check out the Ruach Center where you will find over 280 tap-along audios, with over 100 of them geared towards clearing resistance to action which shows up in the form of fear.

There are over 45 minutes of tap-along audios geared to dealing with the fear of failure and over 30 minutes designed specifically to clear the need to be perfect before taking action.